From：Chinese Archaeology/ Xinhua, 4 July 2014
A Jade casket containing relics of a prominent Buddhist has been found in north China's Hebei Province, local authorities said on Thursday.
A farmer accidentally found a cushion-sized "stone" when he was ploughing fields in the historic site of Yecheng, a 2,500-year-old ancient city located in what is now Linzhang County of Handan City, according to the county's cultural relics protection department. 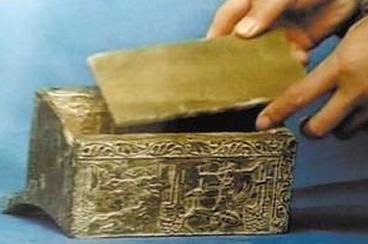 The casket is 22 cm long, 19 cm wide and 9 cm high. It is believed to be an artifact of Hinayana, a branch of Buddhism that prevailed in Sri Lanka, Myanmar and Thailand, said He Liqun, an archaeologist with the Chinese Academy of Social Sciences.
He said the finding proves that Hinayana was introduced to China's middle and lower reaches of the Yellow River.
"Such a casket containing relics of a prominent Buddhist is often enshrined in an underground palace of a Buddhist temple," he added.
Yecheng, an ancient capital of many dynasties, was once a political, economic and cultural center in middle and lower reaches of the Yellow River.
Historical data showed that it has more than 80,000 monks and nuns in 900 temples in the Eastern Wei and Northern Qi dynasties (534-577).
Posted by Hans van Roon at 18:49