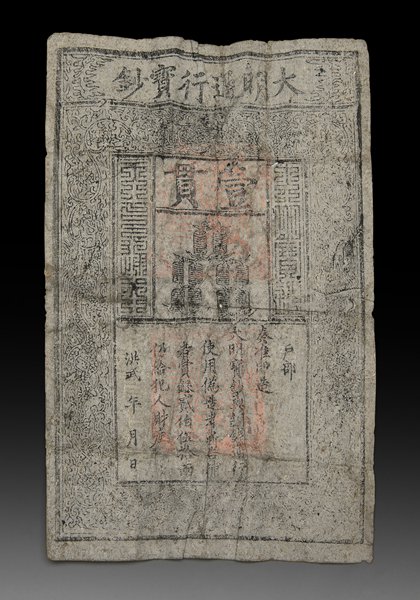 The Ming Dynasty's "Yi Guan" bank note found inside the wooden sculpture (Photo/Courtesy of Mossgreen Auctions)
A Chinese wooden sculpture and a rare Ming Dynasty bank note that was discovered inside were on display in an exhibition in London on 3-6 November at The Beaumont Hotel.
The 13-14th century sculpture and the bank note will later be auctioned in Sydney on December 11, as part of The Raphy Star Collection of Important Asian Art by Mossgreen, Australia's leading art business, with auction, gallery and private sales totalling AUD$50 million in 2015.
Paul Sumner, chief executive officer of Mossgreen Auctions, told the Global Times, "It is very rare to find this kind of bank note inside a head of a wooden Buddhist sculpture."
The sculpture and the bank note will be sold together as one lot for between $30,000 to $45,000.

A thrilling discovery
Mossgreen specialists discovered this bank note hidden within the cavity of the head of a large, Chinese wooden sculpture of a Luohan while cataloguing this piece.
Specialist Ray Tregaskis, head of Asian Art at Mossgreen, said, "It was a thrilling moment. While it was not unusual for consecration items such as semi-precious stones or scrolls to be left within the base or on the back of a sculpture, the discovery of this rare Ming Dynasty bank note is an exciting one and importantly, it verifies the date of the sculpture."
Luohan is a Chinese word used to describe those who have completed the four stages of Enlightenment and reached the state of nirvana.
The wooden sculpture is based on the style and carving techniques of the Yuan Dynasty (1279-1368). It originally belongs to a set of several Luohan, and placed in a Buddhist temple for worshiping.
The sculpture was part of an important private collection that was sold by A.J. Speelman in the year of 1990 to Raphy Star, a collector who over 30 years has formed a diverse collection of Asian art.
Inspired by the refined aesthetic beauty of Asian Art, particularly Buddhist Art, Raphy Star said "collecting became something of an addiction."
Usually for the Buddhist figures, especially the gilt bronze figures, there would be some consecration materials inside which would be put in by a Monk or Lama, after the figures were cast.
The common consecration materials are mantra rolls, relics, grains, incense and other precious objects. This is the first time to discover a bank note inside a wooden head.
"We don't know exactly why it was there, whether it was put in by the carver/patron after it was carved or by the patron who paid the money to repair the sculpture 40, 50 years later (probably by later patron)," Sumner told the Global Times.

Hongwu bank note
This kind of bank note was first made during Hongwu period in the 14th century by the first Ming Emperor Zhu Yuanzhang, who defeated the Yuan army and overthrew the rule of the Yuan Dynasty.
It was used as a replacement of bronze coins. Only this kind of bank note and bronze coins were allowed to be used during the trading by normal people. Gold and silver were forbidden.
"From this bank note we can see what kind of paper they were using for making the bank note during the Ming Dynasty, and what kind of printing technology was used during that period. And also the financial system of that period," Sumner told the Global Times.
The note is inscribed "Da Ming Tong Xing Bao Chao" and the value is "Yi Guan."
"Yi Guan" was the biggest note during that time. It equals to the present bank note value of around 600 yuan. This kind of Hongwu bank note was in use for about 270 years.
The Ming Dynasty ruled for almost 300 years during a prosperous time which saw increased trade with Europe.
The bank note is stamped with three official red seals and dated the third year of the Ming Dynasty, the Hongwu period (1368-1398).
The note is inscribed with a sinister warning for any would be forgers, "Authorized by the Department of Finance, this bank note has the same function as coins; those who use counterfeit bank note will be beheaded, and the whistle-blower will be rewarded 250 liang silver plus all the properties of the criminal. The third year of Hongwu period."
The pair of artifacts, to be auctioned by The Raphy Star Collection of Important Asian Art, is believed to be the most important and diverse collection of Asian Art to have been offered at auction in Australia.
"We expect a high level of interest from discerning collectors and institutions all over the world," Sumner said, adding that the market for Chinese historical works of art has boomed along with the overall economic development over the recent years.
"It shows no sign of slowing as demand outstrips supply for the rarest and most sought after works of art," said Sumner.
Posted by Hans van Roon at 11:39