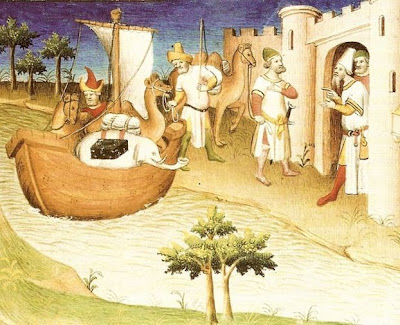 A meticulous description of currency and salt production could restore Marco Polo's honor by proving  that he really did go to China, a new study into the explorer's accounts of the Far East suggests.
"Polo was not a swindler," said Hans Ulrich Vogel, Professor of Chinese Studies at the German University of Tübingen.
Vogel reexamines the great Venetian traveler in a new book entitled "Marco Polo Was in China."
"The strongest evidence is that he provided complex and detailed information about monetary conditions, salt production, public revenues and administrative geography which have been overlooked so far, but are fully corroborated in Chinese sources," Vogel told Discovery News.
The historian noted that these Chinese sources were collated or translated long after Marco Polo’s time.
"So he could not have drawn on them. He could not even read Chinese," he said.
Although there is no doubt Polo existed -- traces of his family home are still around in Venice -- many have questioned whether the 13th-century traveler actually made it to China.
Skeptics argue that his famous travelogue Description of the World, commonly called The Travels of Marco Polo, does not mention several distinctive features of the Chinese society.
PHOTOS: Marco Polo Never Got to Asia (Plus More History Myths)
Born around 1254 in the Venetian Republic, Polo claimed that he reached China with his merchant father and uncle in 1275, at age 17. He would spend the next 24 years venturing into the Far East China, serving for some years in the court of Mongol emperor Kublai Khan.
The story of the explorer's return to Venice in 1295 and of the subsequent coup de theater when he threw back his Tartar clothes and allowed precious stones to cascade over the floor, has become part of the Polo legend.
Since the mid-eighteenth century, doubts have been raised about Marco Polo’s presence in China.
Historian Frances Wood argued in her 1995 book "Did Marco Polo Go to China?" that the famous explorer didn't even get beyond Constantinople. He would have made the rest of the trip up, with the help of an imaginative ghostwriter, Rustichello da Pisa, cobbling together details provided by fellow traders who had actually been there.
Although Polo's tales of exotic lands inspired Columbus and became the model for generations of explorers, scholars wondered why he did not mention tea, chopsticks, the Chinese writing system, and the practice of binding women's feet.
Furthermore, there is no mention of the Great Wall, while Marco, his father and his uncle are not recorded in any Chinese document.
According to Vogel, skeptics have often overestimated the frequency of documentation and the intentions of Chinese historiographers.
"Even Giovanni de Marignolli (1290-1357), an important papal envoy at the court of the Yuan rulers, is not mentioned in any Chinese sources – nor his 32-man retinue, nor the name of the pope," he said.
As for the Great Wall, new research has established that it did not exist at the time.
"The original wall had long since disintegrated, while the present structure -- a product of the Ming Dynasty (1368-1644) -- was yet to be erected," said Vogel.
NEWS:2,400-Year-Old Pot of Soup Unearthed in China
Other historians have used these arguments to rehabilitate the Venetian traveler, but Vogel used new data, focusing on a largely neglected part of Polo's travelogue.
"He is the only one to describe precisely how paper for money was made from the bark of the mulberry tree. Not only he detailed the shape and size of the paper, he also described the use of seals and the various denominations of paper money," said Vogel.
According to the historian, Polo's Travels is not a 13th century guidebook to China - on the contrary, it's a rather dry manual to the commerce of the Silk Road.
"Marco Polo reported on the monopolizing of gold, silver, pearls and gems by the state – which enforced a compulsory exchange for paper money," said Vogel.
"He described the punishment for counterfeiters, as well as the 3% exchange fee for worn-out notes and the widespread use of paper money in official and private transactions," he added.
Vogel noted that Polo is also the only one among his contemporaries to explain that paper money was not in circulation in all parts of China, but was used primarily in the north and in the regions along the Yangtze.
According to Polo, cowries, salt, gold and silver were the main currencies in other parts of China such as Fujian and Yunnan.
"This information is confirmed by archaeological evidence and Chinese sources compiled long after Polo had written his Travels," Vogel said.
The Venetian traveler's description of salt production was also accurate and unique. Not only he listed the most important salt production centers, but described the methods used to make salt and detailed the value of salt production.
"Polo knew what he was talking about. His reports about monetary conditions, salt production and revenue, public finance and administrative geography are more precise and accurate than of all other Western, Persian or Arabian authors taken together," Vogel said.
"This and other information, the accuracy of which has not yet been fully appreciated, indicate that Marco Polo really did serve the Great Khan," he concluded.
Photo: Miniature from "The Travels of Marco Polo". Wikimedia Commons
Source article: Discovery News
Posted by Hans van Roon at 09:24