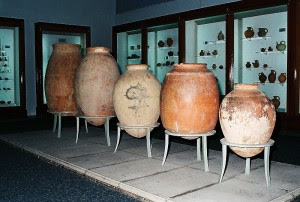 TAXILA, April 8: A team of scholars and students from Taxila Institute of Asian Civilization (TIAC) headed by its Director Prof Dr Mohammad Ashraf Khan has discovered a large number of objects during excavations at ancient Buddhist Stupa and monastery near Taxila. “The most remarkable discovery is an iron nail and animal bones which opened two new chapters in the history of Gandhara. One is that these people knew the use of different metals and the second rejected the notion that the followers of Buddhism at that time were only vegetarian,” said Dr Khan while talking to this correspondent here on Sunday. He said the discovery of animal bones at a deep surface and at the kitchen area was a proof that the monks and followers of Buddhism at that time were not vegetarians. “This will need rewriting of the history of Taxila in the light of the new and substantial evidence.” Dr Khan said the discovery of the iron nail revealed the craftsmanship of the people living in the area between the first century and 4th century AD and their knowledge and utilisation of different metals. He said the other discoveries, including a lamp, terracotta and beads and kitchen pots, belonged to the Kushan period. During the excavations, as many as 55 monk cells were also discovered, he said, adding in the previous excavations such a huge quantity of cells was never discovered in Taxila valley. He said the monastery where the discoveries were made comprised 280 metres area and so far only 80 metres area has been excavated while the remaining was still being unexcavated. Dr Khan said the main water tank area would also be excavated during the current season while during the next session the stupa would be excavated and preserved. He said despite limited resources, the university had planned to excavate and preserve the whole site. In reply to a question, he said around 60 students from the TIAC were participating in the excavation which gave them an opportunity to learn about practical work, including the principles of excavations, tools of excavation, method of preservation survey and drawing. Responding to another question, he said though the site remained victim of digging by illegal treasure hunters, he was optimistic about a major discovery. He added that due to significance of the site, TIAC had, in collaboration with the Khyber Pakhtunkhwa department of archaeology and museums, initiated the excavation and preservation project. Dr Khan said TIAC had earlier carried out excavation at the site in July 2011 during which an assembly hall, a cooking area, stores as well as steward areas had been discovered along with a significant amount of antiquities. Source: Dawn.com Newspaper
Posted by Hans van Roon at 22:31