The Last Days of Mes Aynak 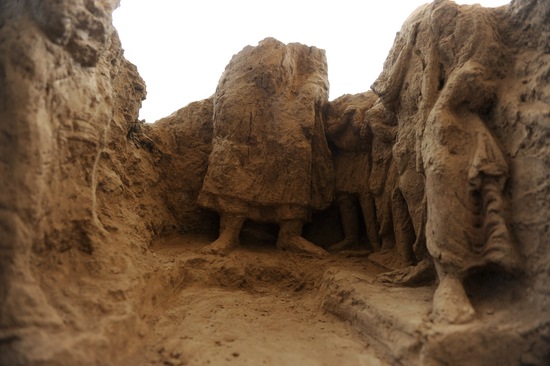 Buddha statues discovered inside an ancient monastery in Mes Aynak, in the eastern province of Logar, Afghanistan. 2010 photo by Shah Marai/AFP/Getty Images.

When documentary filmmaker Brent Huffman first visited the Buddhist archaeological site of Mes Aynak in eastern Afghanistan in June 2011, he was awed by the 2,600-year-old city, how it stretches for 100 acres, encompassing artifacts, monasteries and more than 200 statues.
On Thursday, he's on his way back to bear witness to its last days.
Mes Aynak, as it happens, sits on a rich copper mine worth more than $100 billion. In 2007, a 30-year lease was granted to China Metallurgical Group Corporation (MCC) for $3 billion, the largest foreign investment made in the country, according to the Afghan Ministry of Mines. MCC has given archaeologists until the end of December to excavate the site, but according to lead archaeologist Philippe Marquis, a proper excavation of the entire site would take 30 years.
Huffman has been documenting the story of three archaeologists who are working to save the site. He follows Marquis, a French archaeologist leading the effort, J. Mark Kenoyer, an American archaeologist and professor at the University of Wisconsin, and Abdul Qadeer Temore, an Afghan archaeologist who is also trying to preserve his cultural heritage. The documentary will also feature Zhenguo Liu, an MCC manager working in the Mes Aynak compound.
Huffman is an award-winning director, writer, editor and cinematographer. He is also an assistant professor at Northwestern University's Medill School of Journalism. We recently spoke to him about Mes Aynak, from its history to the current the situation:
Tell us about Mes Aynak and what it's like to be there.
Brent Huffman: First off, it's difficult to get there. It's about 90 minutes from Kabul, even though, in terms of miles, it's only 25 miles southeast from Kabul. The roads are really bad and they often get washed away if it rains. You also have drive slowly through villages, many of which have been known to be Taliban friendly, so it's very dangerous. You also have to go down roads that are often land-mined, and sometimes people will shoot rockets at cars that drive through. It's really dangerous to get on site.
But once you get to Mes Aynak, it's absolutely incredible. It's awe inspiring. It reminds me of Machu Picchu in Peru in terms of massive structure. You're looking at a very large Buddhist city about 400,000-square meters in size. It encompasses mountain ranges, a monastery complex and dozens of temple structures. There are 400 life-size or larger Buddha statues on site. They're finding manuscripts inside some of the structures, so they're constantly pulling out amazing new things.