The Lady with the Phoenix Crown: Tang-Period Grave Goods of the Noblewoman Li Chui (711-736) 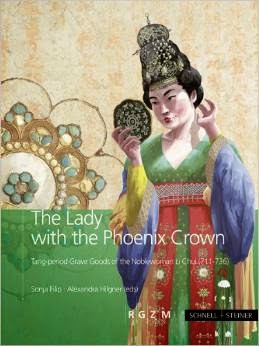 The Tang Dynasty (AD 618–907), China’s Golden Age, was a flourishing period teeming with fascinating cultural phenomena. At the centre of this cosmopolitan empire lay the capital city of Chang’an – one of the largest metropolises of its time and now hidden below present-day Xi’an. Aristocrats as protagonists of courtly life shaped the character of the city, their luxurious everyday life equally reflected in lavishly furnished tombs. Nowadays, most of these tombs are found robbed. Evidence of the former splendour of these subterranean chambers only survives in the form of marvellous wall paintings and clay figurines disregarded by the grave robbers. The undisturbed tomb of Li Chui who had died in AD 736, a descendant of emperor Gaozu, was excavated in Xi’an in 2001. It took a German-Chinese team six years to restore the intricate grave furnishings. For the first time, it was possible to reconstruct the opulent jewellery assemblage of a Tang period noblewoman. In conjunction with the results of scientific analyses by a team of specialists from various disciplines it was possible to obtain new insights into Tang period burial culture. This is the first time that these results are presented to a wider English-speaking public. Richly-illustrated appendices throughout the text provide further insights into Tang period everyday life.

The Tomb of Li Chui

The Tomb of Li Chui
Interdisciplinary Studies into a Tang Period Finds Assemblage
On May 21st 736 the noblewoman Li Chui died at the age of 25, as related by the inscription on the epitaph found in her tomb. She was buried in an earth-chambered grave outside the Tang period capital Chang’an, the present-day Xi’an.
Thanks to a fortunate and rare circumstance, throughout the centuries her tomb was never robbed and numerous, precious grave goods survived. In 2001 an unusually rich and filigree assemblage of jewellery was lifted together with the deceased’s skeleton in two blocks by a team of Chinese archaeologists in a far-sighted way and brought to the archaeological laboratory in Xi’an. There specialists of the ­German-Sino co-operation project of the Römisch-Germanisches Zentralmuseum (Mainz) and the Shaanxi Provincial Institute of Archaeology (Xi’an) worked together on the uncovering, documentation and presentation of the finds and contexts. For the first time such a multipartite and fine jewellery assemblage could be analysed and reconstructed within its archaeological context. The result is of impressive singularity.
In the publication presented here an interdisciplinary team of academics deal in many individual studies with the complex investigations into the Tang period burial of Li Chui. Apart from archaeology, art and cultural history, as well as sinology, it is not only the scientific restoration and conservation, but also various fields of the natural sciences, which worked together towards one goal: to convey a unique and realistic insight into the world of Li Chui and her times.
Posted by Hans van Roon at 17:12