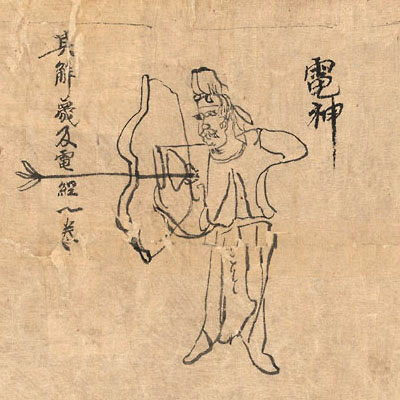 Drawing at the end of Dunhuang manuscript Or.8210/S.3326.
Showing this manuscript today to a group of visiting students, I was again struck by the strangeness of this figure and hope that someone might be able to provide an explanation or point to similar figures elsewhere.
The crude line drawing shows a figure dressed as a Chinese official with the label 電神 (Dianshen, thunder god) to the right and an apparent book title to the left — ending with 電經一卷 (Thunder Sutra, one roll). Most curious, however, are the drawn bow and arrow: the arrow is back to front, ie pointing towards the thunder god himself.
The image appears at the end of a very interesting — but also somewhat mysterious — manuscript which consists of two texts (translated for IDP by Imre Galambos). The first is a divination text based on cloud formations (nephelomancy). This is followed by a series of star charts. In a paper by Jean-Marc Bonnet-Bideau and Francois Praderie on this manuscript, the authors showed the star charts to be very accurate: it is a scientific document. The paper is extremely fine but the writing and the graphics appear sketchy and are certainly not in a fine scribal hand. It is therefore possible that this was a working copy which used a master — and fine — copy of a star chart, perhaps even tracing from it, hence the accuracy of the stars' positions. But how did this end up in Dunhuang, 1500 miles from the Imperial Astronomy Bureau in Chang'an where it was almost certainly produced?
Although we will probably never have all the answers to these questions, I hope that the suicidal thunder god might yet have more to tell us.

POSTED BY SUSAN WHITFIELD
Posted by Hans van Roon at 22:36