A Few of Our Favourite Things: #18 Dan Waugh

As part of IDP's 20th anniversary celebrations we have asked twenty of our friends and supporters to select their favourite item from the IDP collections. The full selection will form an online catalogue and will be featured in the spring and autumn 2014 editions of IDP News 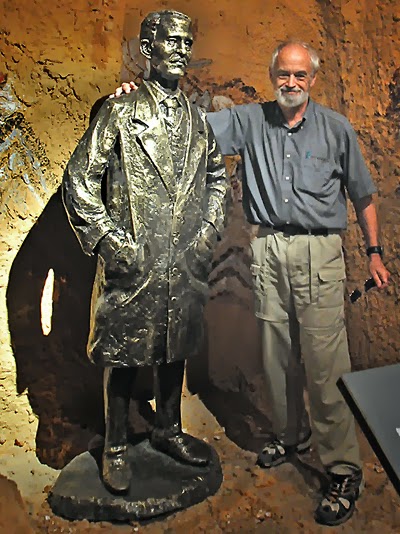 Professor Dan Waugh and Aurel Stein, Jimsar County Museum, 2009.
Daniel C. Waugh is Professor Emeritus at the University of Washington(Seattle, USA), where in the mid-1990s, his interests shifted from his original specialization, pre-modern Russia, to Central Asia. The watershed from which has flowed ‘the rest of his life’ was his commitment in 1998 to start teaching a course on the Silk Roads, in preparation for which he enrolled in a summer program at the Mogao Caves, co-sponsored by the Silkroad Foundation and the Dunhuang Academy. In subsequent years, he was the founding director of Silk Road Seattle, which sponsored a series of educational programs and created an extensive set of Internet resources. In 2003 he became editor of the Silkroad Foundation’s journal, which has now grown from a thin newsletter to a substantial annual. Projects to develop and share educational resources on the Silk Roads with the IDP are ongoing. His chosen object is the Dunhuang silk banner 1919,0101,0.139. 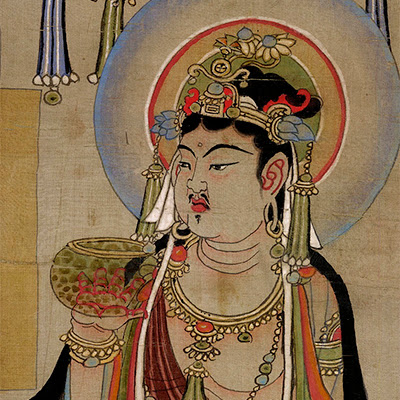 In 2009, I was in London examining the objects in the British Museum which had been donated by C. P. Skrine after he had served as British Consul General in Kashgar in the early 1920s. Skrine’s modest collection included fragments of early Buddhist paintings and manuscripts which he had acquired in Khotan. The article I co-authored with Ursula Sims-Williams on the Skrine material and the antiquities market in Khotan then appeared in my journal The Silk Road, Vol. 8 (PDF), and has since been published in Chinese translation.

On that trip to London, I was fortunate to be included in a private viewing of some of the Dunhuang banners, which Roderick Whitfield had organized for a colleague. When asked there in the storage rooms of the British Museum whether there were any of the banners from Mogao Cave 17 that I particularly wanted to see, with little hesitation I chose 1919,0101,0.139, a late ninth-century painting on silk depicting a bodhisattva holding a glass bowl. Why that painting? In the first instance for the bowl, which to my mind embodies much of what the ‘Silk Roads’ are all about. It is one of the Middle Eastern cut glass bowls (numerous in the Sassanian period) which traveled along the Silk Roads all the way to Japan where one is in the collection of the Shōsō-in at Nara. When found in archaeological contexts these bowls usually have a rough patina and no longer are transparent, but here one can see through the bowl the hand that is holding it. In a recent addition to its display of such Sassanian glass, the British Museum has included a replica (2007.6004.1) made by Japanese glass artist Tami Ishida to give a sense of how their facets would have sparkled when new. 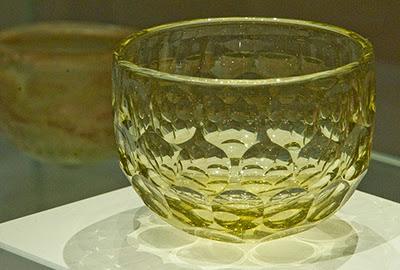 That Dunhuang banner also evokes memories for me. When at the Mogao Caves for the first time in 1998, I was particularly struck by Cave 196, dated to 893-4, that is, approximately the same time as the banner. Cave 196 is distinctive in that, unlike most of the other Mogao caves, it has preserved its original entrance hall and also some of its statues in their original position on the large U-shaped altar platform of the main hall. The best known of these is a bodhisattva of great beauty in the position of 'royal ease', whose features remind us of the bodhisattva depicted on the banner.
Cave 196 is an early example of the the design of some of the largest and most impressive of the Mogao caves, best known from the ones commissioned by the Cao family in the tenth century. Among them is Cave 61, constructed about half a century after Cave 196, which contains the famous depiction of Mount Wutai on the west wall and the numerous donor images of the Cao family in the lower register at the east side of the room. The imposing, larger-than-life statuary, which would have occupied the central altar platform in those caves, is no longer extant. Cave 196 thus offers a rare sense of what the devotee of the ninth or tenth century might actually have experienced upon entering such a cave, as though re-born in Paradise in the actual presence of the Buddhist divinities. The devotee of my imagination might well have earned merit by commissioning a banner whose elaborately garbed subject bears what would have been considered a most precious offering.
When we contemplate Dunhuang, our gaze tends to be directed inward, to the treasure trove of manuscripts, banners, murals and statuary which have so transformed our understanding of the Silk Roads. It is easy to get lost in the details. For many over the centuries down to the present, to visit the Mogao Caves has been a life-changing experience, with some of the most vivid memories the result of turning the gaze outwards. Remember that the founding of the caves is associated with a vision experienced at sunrise over the Sanwei Mountain to the east: Mogao is special not in the least for its extraordinary natural setting. Too few visitors today climb the hills to see the fragile strip of green below in its starkly beautiful desert setting and experience the landscape turning purple at sunset. Even fewer would spend a night (as I did in 1998) at the temple on the top of Sanwei Mountain with its curious ‘folk’ image of Guanyin, watching the moon rise and awakening next morning to a rosy-fingered dawn. 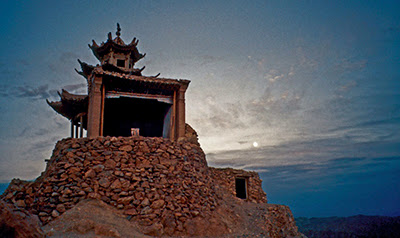 The Guanyin temple at the top of Sanwei Mountain and the rising moon. Photograph by Daniel C. Waugh 1998. 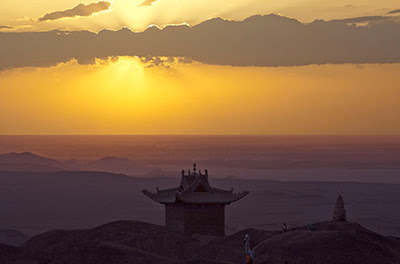