The Everlasting Flame: Zoroastrianism in History and Imagination 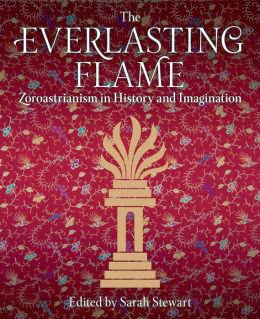 With such ancient beginnings, Zoroastrianism is as remarkably enduring as it is venerable. It has also been influential beyond its own followers, interacting with other, younger faiths: especially their views on evil, messianic notions and ideas about the last days. The power of its sacred scriptures, the Gathas, and the resonance of the message of its founder, Zarathustra (or Zoroaster) transformed it from small beginnings into the principal religion of Iran until the advent of Islam.This richly illustrated book explores the chief themes of Zoroastrianism: its rise during the second millennium BCE; its doctrines, rituals and teachings; its growth into the foremost faith of the Achaemenid and Parthian empires; its consolidation under the Sasanians; its expansion east to China; and the impact it had on Judaism, Christianity and Islam. From Iran to the west coast of India, the story continues with the maritime exodus of the Zoroastrians and their settlement as an immigrant community (now called 'Parsis') under British colonial rule. With chapters by world-leading authorities, this is a vital record of the arts, literatures and cultures of one of the world's most fascinating religious traditions.

'This sumptuous volume is an Iranist's dream come true. The individual chapters - written by the foremost specialists in their fields - are of the highest quality while the accompanying illustrations are both judiciously chosen and appealing. The book itself takes one's breath away for its sheer breadth and for the quantity of items shown. Here are gathered, for both laypeople and specialists, illustrations that one would otherwise have to chase down in innumerable publications or find only in libraries and museums. The Everlasting Flame will become an indispensible resource for teachers and students and a source of vital information for anybody at all interested in the history of Zoroastrianism and in practising Zoroastrians, particularly the modern-day Parsis of India.' - Prods Oktor Skjarvo, Aga Khan Professor of Iranian, Harvard University 'If at all, Zoroastrianism has been celebrated for the remarkable impact of some of its main religious notions, such as dualism and monotheism, the bodily resurrection of the dead and narratives of a future saviour. Words such as "paradise" and "magic" also seem to derive from Persia. In addition to valuable introductory essays on Zoroastrian history, The Everlasting Flame replenishes the historical account with rich material and visual dimensions that all too often have been neglected in the overall perception of this religion. This unique catalogue offers many new insights and a broad range of perspectives. It will prove to be an indispensible resource for everybody interested in Zoroastrianism, Iranian history and related areas.' - Michael Stausberg, Professor of Religion, University of Bergen, author of Die Religion Zarathushtras and of Zarathustra and Zoroastrianism

Sarah Stewart is Lecturer in Zoroastrianism at SOAS, University of London, UK. She is general editor, formerly with Vesta Curtis and latterly with Edmund Herzig, of the series The Idea of Iran, within which she has co-edited five volumes (all published by I.B.Tauris).
Posted by Hans van Roon at 22:24