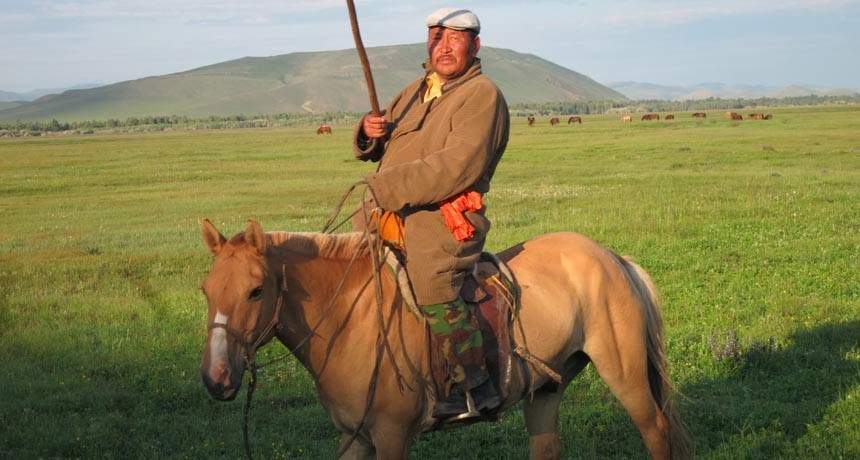 Wet, mild weather — not drought — may have helped Genghis Khan expand the Mongolian empire to the largest in human history.
Rings in trees in the mountains of central Mongolia show that at the same time the empire began to grow in the 13th century, the weather of central Asia became uncommonly wet. The moist climate could have boosted the region’s grasslands, giving Khan and his people more food for raising livestock and horses and a better ability to focus on building political and military power, researchers suggest March 10 in theProceedings of the National Academy of Sciences.

Tree-ring and weather data also suggest that central Mongolia's drought from 2000 to 2009 was the hottest in the last 1,000 years. If warming continues, it could disrupt how modern Mongolians live, the scientists say.

A 1,112-y tree-ring record of moisture shows that in opposition to conventional wisdom, the climate during the rise of the 13th-century Mongol Empire was a period of persistent moisture, unprecedented in the last 1,000 y. This 15-y episode of persistent moisture likely led to a period of high grassland productivity, contributing fuel to the Mongol Empire. We also present evidence that anthropogenic warming exacerbated the 21st-century drought in central Mongolia. These results indicate that ecosystems and societies in semiarid regions can be significantly affected by unusual climatic events at the decadal time scale.

Although many studies have associated the demise of complex societies with deteriorating climate, few have investigated the connection between an ameliorating environment, surplus resources, energy, and the rise of empires. The 13th-century Mongol Empire was the largest contiguous land empire in world history. Although drought has been proposed as one factor that spurred these conquests, no high-resolution moisture data are available during the rapid development of the Mongol Empire. Here we present a 1,112-y tree-ring reconstruction of warm-season water balance derived from Siberian pine (Pinus sibirica) trees in central Mongolia. Our reconstruction accounts for 56% of the variability in the regional water balance and is significantly correlated with steppe productivity across central Mongolia. In combination with a gridded temperature reconstruction, our results indicate that the regional climate during the conquests of Chinggis Khan’s (Genghis Khan’s) 13th-century Mongol Empire was warm and persistently wet. This period, characterized by 15 consecutive years of above-average moisture in central Mongolia and coinciding with the rise of Chinggis Khan, is unprecedented over the last 1,112 y. We propose that these climate conditions promoted high grassland productivity and favored the formation of Mongol political and military power. Tree-ring and meteorological data also suggest that the early 21st-century drought in central Mongolia was the hottest drought in the last 1,112 y, consistent with projections of warming over Inner Asia. Future warming may overwhelm increases in precipitation leading to similar heat droughts, with potentially severe consequences for modern Mongolia.