Researchers may know identity of ancient town in Xinjiang 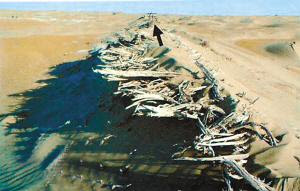 An ancient town that was discovered 6.3 kilometers west of the Lop Nor Creek Tomb in Xinjiang is most likely the mysterious town of Zhubin, according to a report from Chongqing Evening News.
After more than one year of investigation and study, Lu Houyuan and others recently released the important research results in China's authoritative magazine, the Chinese Science Bulletin.
According to sources, the ancient town is one of the three archaeological discoveries made between November and December in 2008 by the Lop Nor Scientific Exploration Team, led by Xia Xuncheng, researcher at the Xinjiang Institute of Ecology and Geography under the Chinese Academy of Sciences. It was named the "Number Four Han and Jin Dynasty Ruins" at the time.
After research and analysis, researchers found that the walls of the ancient town were built in the Northern Wei Dynasty around 440 to 500 A.D.
The ancient town ruins may be the ruins of Zhubin Town, which was recorded in the historical documents of the Northern Wei Dynasty. Therefore, the researchers have temporarily named it the "Zhubin River Ancient Town Ruins."


For more information, read the article in the Chinese Science Bulletin
Posted by Hans van Roon at 15:50 No comments: