Antique Art from China, Tibet and Japan in Prague


The National Gallery in Prague holds an unexpectedly representative collection of Oriental art. Hosted in Kinský Palace right in the city centre, the museum shows a wide range of Asian art objects, including neolithic chinese bronze objects, jades, funery art from China, terracotta statues and horses, buddhist paintings and sculptures from China, Tibet, India, Southeast Asia and Japan, Chinese cinnabar lacquer works, emaille cloisonné objects, chinese and japanese ceramics and porcelains and many many more objects worth a visit.
Surprisingly, the Czech Republic holds one of the largest collections of works from Qi Baishi in the West, including more than one hundred of his paintings housed by the National Gallery in Prague alone. For researchers working on Qi Baishi, the museum in Prague is certainly an important source of information.
The collection of buddhist art contains some impressive pieces. One of the most striking figures is a large wooden depiction of Luohan Kashyapa. The figure dates back to 10/11th century, Liao dynasty, China. It is 99cm high and is believed to be one figure of a buddhist trias from an temple in that time China. Kashyapa would have been placed at the right side of the buddha accompanied by Ananda on the Buddha´s left. Given the fact, that this figure is a wooden artwork with about one thousand years of age, this piece is really impressive!

Interesting for collectors of antique buddhist figures, there are a few examples of early buddhist sculpture exhibited, resuming the styles of Northern Wei dynasty, around 500 A.D. These small bronze figures, sometimes with traces of gilding, are beautiful examples of stylistic transformations at that time, when Buddhism was just spreading around Silk Road reaching north and far eastern Asia.
Permanent exhibition of the Art of Asia and the Ancient Mediterranean from the Collections of the National Gallery in Prague and the National Museum. „The Art of the Old World“, Kinský Palace Prague, listed in VCM – Virtual Collection of Masterpices.
Go to the museum´s website: Collection of Oriental Art of the National Gallery in Prague
(Pictures courtesy of National Gallery in Prague)

LET THE VILLAGE DOGS BARK ALL THEY WANT. THE CARAVAN IS MOVING ON.

Erdene Uul, however, is the mountain where Chingis Khan went to escape from the Merkits. You will recall from reading the Secret History of the Mongols that Chingis’s father had kidnapped his own wife—Chingis’s mother—from the Merkits, a tribe who lived south of Lake Baikal in what is now Siberia, and now that Chingis was a young man they had come to exact their revenge. By fleeing to Burkhan Khaldun (Erdene Uul) by himself Chingis managed to escape from the Merkits, but they were able to seize his wife, Börte. Chingis would later mount an expedition to Siberia to get her back—the beginning of his military career—but when he finally retrieved her she was pregnant, apparently by one of the Merkits, a circumstance which would have an inestimable impact on subsequent Mongolia history.

From the base of the mountain we rode by horse 7.8 miles to the ridge line leading to the summit. 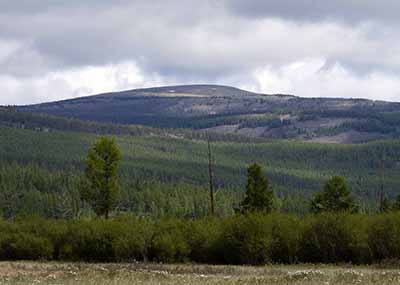 Chingis Khan’s description of his escape on Burkhan Khaldun from theSecret History: 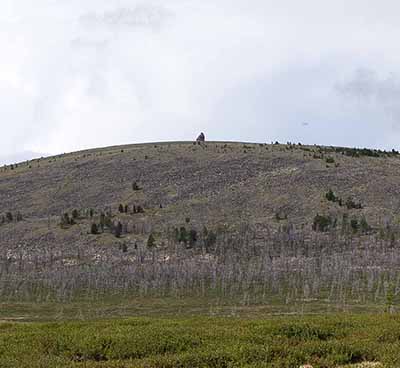 On the ridgeline of Erdene Uul is a granite tor known to local people as Chingis’s Hitching Post. According to local lore, Chingis tied his horse to this rock while he was on Erdene Uul. 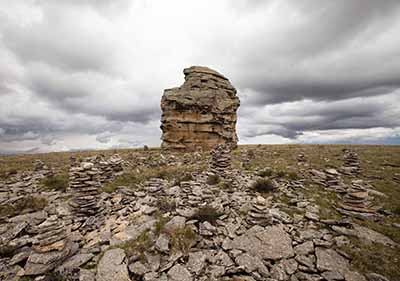 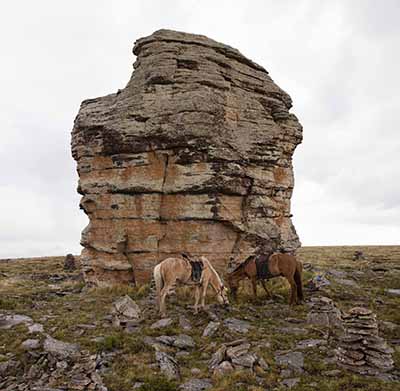 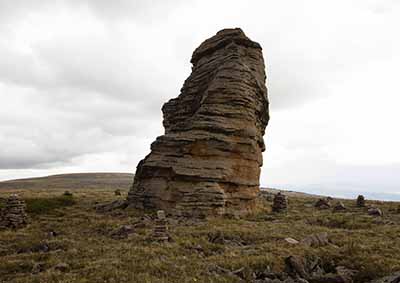 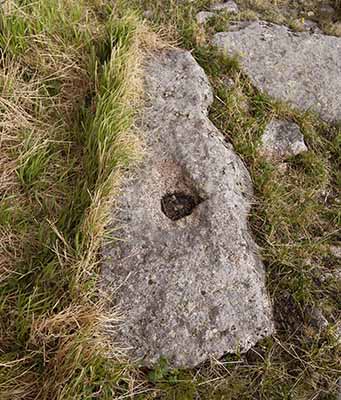 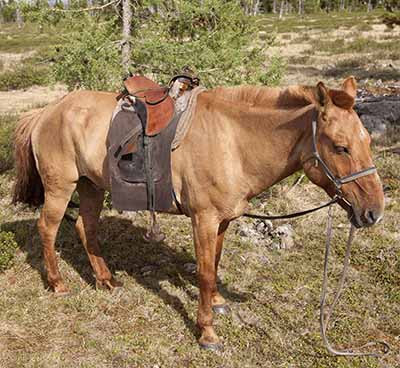 My own trusty horse. In the last few years I have ridden this horse over 600 miles. It is calm, well mannered, never panics in tight situations, and is not lazy; in fact, it possesses all the characteristics one might want in a wife but which are so difficult to find. 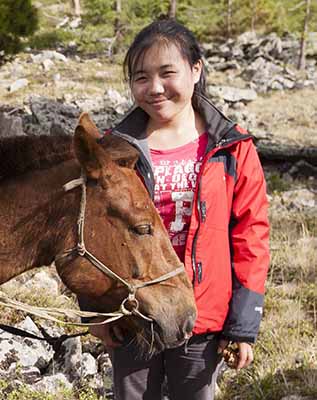 Delgerma, horse wrangler on the trip 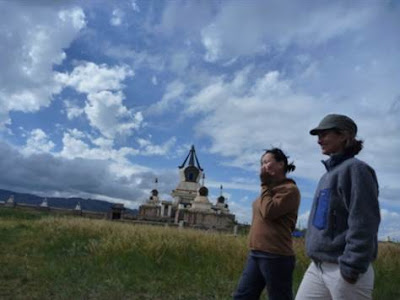 WVU
West Virginia University's Amy Hessl and a colleague walk through a grassy area in Mongolia's Orkhon Valley, which features monasteries and other historic sites.


Beginning in the 13th century, the Mongol Empire spread across Asia and into the Middle East like wildfire, growing into the largest contiguous land empire the world has ever seen.


Historians have long speculated that periods of drought pushed the Mongol hordes to conquer their neighbors, but preliminary new findings suggest that theory may be exactly backward. Instead, consistent rain and warm temperatures may have given the Mongols the energy source they needed to conquer Eurasia: grass for their horses.


This idea, bolstered by the discovery of tree rings that preserve a climate history of Mongolia back to the year 657, is still in the preliminary stages of investigation. LiveScience spoke with Amy Hessl, the dendochronologist, or tree-ring researcher, who along with collaborators Neil Pederson and Baatarbileg Nachin first discovered the preserved trees hinting at the weather during the era of the Mongols.


LiveScience: How did you find the trees that held the Mongolian climate record?


Hessl: We were funded by the National Science Foundation and the National Geographic Society a few years ago to look at how climate change is impacting wildfire activity in Mongolia. So we had driven by this lava flow that looked reminiscent of other places I know of in the American West that have really long climate records from tree rings. The trees growing on thesedry, exposed sites tend to grow until they're really old. And then once they die, the wood decays slowly. It allows you to reconstruct environmental conditions going back a very long time.


We drove by this lava flow, and I was like, "Whoa, that looks like an ideal place." So we went back, and even when we did sample, we didn't think we had anything that great. We were just throwing these pieces of wood back and forth to each other, like, "Oh, we'll make this one into coffee table art." We weren't taking it real seriously.


LiveScience: How did you realize that you'd found something important?


Hessl: I gave them to my colleague Neil Pederson [of Columbia University's Lamont-Doherty Earth Observatory]. He didn't look at them for months, until finally he didn't have anything else to do, so he started to date them. I started getting these texts from him on a Friday night and he was like, "I'm back to the 1200s."
There are certainly other tree-ring records that go back much farther, but this is special for Mongolia because it clearly covers the period of the rise of [Mongol Emperor] Genghis Khan. [Fight, Fight, Fight: The History of Human Aggression]


LiveScience: How can tree rings tell you what the past climate was like?


Hessl: These trees are growing on this lava, and there's very little soil development, so they're really, really water-stressed. When the tree rings are narrow, that tells you that during its growing season there was very little water available. The bigger the rings, the wetter it was.


LiveScience: What sort of climate patterns did you see as the Mongol Empire arose?


Hessl: It's very preliminary, but in the couple of trees we have in that time period we can see that the rings are not only wide, but they're consistently wide for the time that overlaps with the rise of Genghis Khan.


Our inference there is that this would have been an ideal time for high grassland productivity on the steppe, and that maybe translated into more livestock, especially horses for the Mongols.


To put it in perspective, each Mongol warrior had 10 horses at his disposal. Just right there, that's a huge amount of biomass that is required. In addition to that, when the Mongols expanded their range in their traveling and marauding, they brought with them large numbers of livestock that they used to feed themselves. Their whole military operation was basically predicated on the fact that they had large numbers of grazing animals. These climate conditions would have given them more energy to fuel their empires. [Top 10 Ways Weather Changed History]


LiveScience: What happened later on during the Mongol era?


Hessl: There's a well-known cold period that occurred after a volcanic eruption in 1258, and we can see this plunge into cold, dry conditions in Mongolia. At that same time, right around 1260, the Mongols moved their capital city out of the steppe and into Beijing, and we think it's possible that was related as well. We have a historian, Nicola DiCosmo of the Institute for Advanced Study, we're working with who is going to go back through all of the Chinese documents, Mongolian records and European accounts to try to see if there's information that would corroborate our findings or not.


LiveScience: Are you going back to Mongolia?


Hessl: I'm leaving in a week, actually! We're going to go back to the same lava flow and collect additional samples because we didn't really put our hearts into it the first time. We were only there for a few hours.


We've also identified some other lava fields in Mongolia that we think may have a similar ecological setting. We're also collaborating with some other people. One is Avery Cook Shinneman of the University of Washington, who studies lake sediments. She's going to be taking cores out of lakes in the Orkhon Valley, the seat of the Mongol Empire, looking for a little fungal spore that lives in livestock feces. What we're hoping is that we can get some general numbers and density of the livestock around these lakes going back in time.


LiveScience: What do you find interesting about linking past climate to history like this?


Society today is dealing with major threats to our primary energy source, so it's fascinating to me to look back on these earlier civilizations to see them going through the same transitions. It just puts our current situation in perspective.