New Evidence on the History of Sino-Arabic Relations: A Study of Yang Liangyao’s Embassy to the Abbasid Caliphate 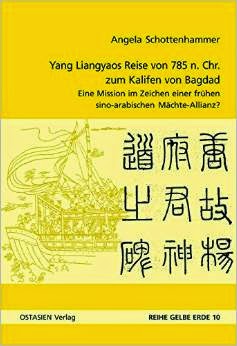 Tang envoy made sea voyage 600 years before Zheng He

The stele inscribed with the achievements of Yang Liangyao. (Internet photo)
The great maritime feats of the Ming Dynasty admiral Zheng He may have been achieved six centuries earlier by a Tang Dynasty diplomat, according to a recent TV program aired by China Shaanxi Broadcasting Corp.
Widely recognized as the greatest admiral of ancient China, Zheng is listed among the world's foremost pioneers in maritime history for the series of expeditions that saw Chinese ships sail to far-flung destinations including the coastal territories and islands in the South China Sea, the Indian Ocean and beyond between 1405 and 1433.
According to the TV program, a recent study of a stele inscribed with more than 1,000 words on the achievements of Yang Liangyao throughout his career in diplomacy during the Tang Dynasty (618-907 CE) showed that Yang may have made the same journey as Zheng He six centuries earlier.
The stele was first discovered in the 1980s in Shaanxi province's Jingyang county, at a site believed to be Yang's tomb. Last year, a structure believed to be the stele's base was discovered at a nearby village, giving researchers more clues to dig deeper.
Researchers found that the inscriptions contain accounts of a journey by a fleet commanded by Yang, who sailed across the Western Pacific Ocean, through the Strait of Malacca and the Indian Ocean to reach the Abbasid Caliphate, now modern day Iraq.
Inscriptions on the stele stated that when Yang reached the fertile crescent between the rivers Tigris and Euphrates, he had ordered to have his ships anchored before continuing the journey by land to the Abbasid Caliphate capital, modern-day Baghdad.
A Shaanxi official said that during the Tang Dynasty, China had maintained close ties with the Middle East partly due to the bustling trade over the "maritime silk road," and that the latest findings gleaned from the stele provides valuable details on the far-reaching voyages by diplomats during the era.
Posted by Hans van Roon at 20:37 No comments: 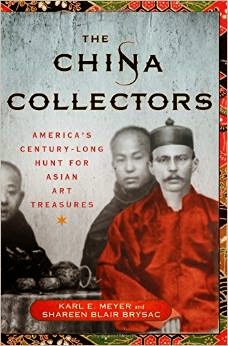 Thanks to Salem sea captains, Gilded Age millionaires, curators on horseback and missionaries gone native, North American museums now possess the greatest collections of Chinese art outside of East Asia itself. How did it happen? The China Collectors is the first full account of a century-long treasure hunt in China from the Opium Wars and the Boxer Rebellion to Mao Zedong's 1949 ascent.

The principal gatherers are mostly little known and defy invention. They included "foreign devils" who braved desert sandstorms, bandits and local warlords in acquiring significant works. Adventurous curators like Langdon Warner, a forebear of Indiana Jones, argued that the caves of Dunhuang were already threatened by vandals, thereby justifying the removal of frescoes and sculptures. Other Americans include George Kates, an alumnus of Harvard, Oxford and Hollywood, who fell in love with Ming furniture. The Chinese were divided between dealers who profited from the artworks' removal, and scholars who sought to protect their country's patrimony. Duanfang, the greatest Chinese collector of his era, was beheaded in a coup and his splendid bronzes now adorn major museums. Others in this rich tapestry include Charles Lang Freer, an enlightened Detroit entrepreneur, two generations of Rockefellers, and Avery Brundage, the imperious Olympian, and Arthur Sackler, the grand acquisitor. No less important are two museum directors, Cleveland's Sherman Lee and Kansas City's Laurence Sickman, who challenged the East Coast's hegemony.

Shareen Blair Brysac and Karl E. Meyer even-handedly consider whether ancient treasures were looted or salvaged, and whether it was morally acceptable to spirit hitherto inaccessible objects westward, where they could be studied and preserved by trained museum personnel. And how should the US and Canada and their museums respond now that China has the means and will to reclaim its missing patrimony?

The China Collectors draws on archives that include reminiscences about looting… [and]describes a range of items, from teacups to columns, that foreign diplomats, merchants, soldiers, archaeologists and explorers funneled to private collections and museums. (The New York Times)

"Two journalists explore the allure of Asian art …a passion shared by some fascinating figures throughout the past century." (Kirkus Reviews)

Meyer and Brysac reunite to present a thorough survey of the key players responsible for shaping many of America's most comprehensive collections of Chinese art. (Library Journal)

Historians Meyer and Brysac track the provenance of the Chinese collections housed in U.S. museums in this impressively researched survey of the adventurers who acquired these treasures… the issue of whether Chinese relics should be returned home is a timely one. (Publisher's Weekly)

"The China Collectors is a journey every bit as thrilling and surprising as the expeditions that fill its pages. From the story of America's hunger for Asian antiquities, Karl E. Meyer and Shareen Blair Brysac have unearthed a tale that is rich with politics, culture, and adventure. It is not only the cinematic story of Boston Brahmins and Beijing Mandarins, dueling for China's treasures, but also an epic drama about great powers, drawn together by mutual fascination and suspicion." - Evan Osnos, author of Age of Ambition: Chasing Fortune, Truth, and Faith in the New China

"The China Collectors is a treasure trove of indispensable information about North America's abiding fascination with the art, architecture, and archeology of China. It is essential reading for anyone, cognoscente and dilettante alike, with an interest in the history of the acquisition and exhibition of China's artistic heritage in the United States and Canada." -Victor H. Mair, professor of Chinese language and literature at the University of Pennsylvania

"In this fascinating book, Karl Meyer and Shareen Brysac reveal the extraordinary stories behind the outstanding collections of Chinese art in American museums. From ships' captains and pioneering explorers armed with pick-axes and guns as they braved bandits and frost-bite to pioneering collectors and dealers in the Peking antique markets of the 1920s and 1930s, the cast of characters is stunning. The questions of legitimacy and restitution are also dealt with sensitively. It is beautifully written treasure trove." -Frances Wood, author of The Silk Road

"This edifying page-turner is the crème de la crème of archeological adventuring. Combining a connoisseur's vision of Chinese art with the narrative sweep of master story tellers Meyer and Brysac have produced the first comprehensive account of the controversial treasure hunt to pirate imperial artwork, exotic gems and ancient relics from China's vanquished Imperial palaces and the ancient ruins of Buddhist cities. This vibrant tapestry is threaded with unique vignettes and a cast of passionate personalities (who looted or salvaged, transported and traded the coveted historical treasures which now adorn the world's top museums." - Audrey Ronning Topping: Author of China Mission: A Personal History from Imperial China to The People's Republic)
Praise for Tournament of Shadows:

A treasure trove of anecdotes and original sources for the specialist, and a rollicking yarn for those new to the subject. (Charles Clover, Financial Times)

Shareen Blair Brysac has been an award-winning documentary producer for CBS News, the author of four books including Tournament of Shadows and Kingmakers, and a contributing editor of Archaeology Magazine. She has written for The New York Times, The Washington Post, The International Herald Tribune, The Nation and Military History Quarterly.

Karl E. Meyer was a longtime foreign correspondent and editorial writer at The Washington Post and The New York Times and the Editor of the World Policy Journal. A Princeton Ph.D., he has taught at Yale, Princeton, and Tufts' Fletcher School. His fourteen books include The Plundered Past, on the illicit trade in antiquities; The Art Museum: Power, Money, Ethics; and The Pleasures of Archaeology.
Posted by Hans van Roon at 11:43 No comments:

Ecns.cn 27 March 2015
Mural paintings have been found in a tomb dating from the Yuan Dynasty (1271-1368) during construction in Taiyuan, North China’s Shanxi province, March 27, 2015. The paintings in the octagonal tomb feature people, flowers and birds. Feng Gang, an archaeologist at the Cultural Relics and Archaeology Institute in Taiyuan, says the findings are of considerable value to history, art and science. Restoration work has begun to preserve the findings. (Photo: China News Service/Wei Liang) 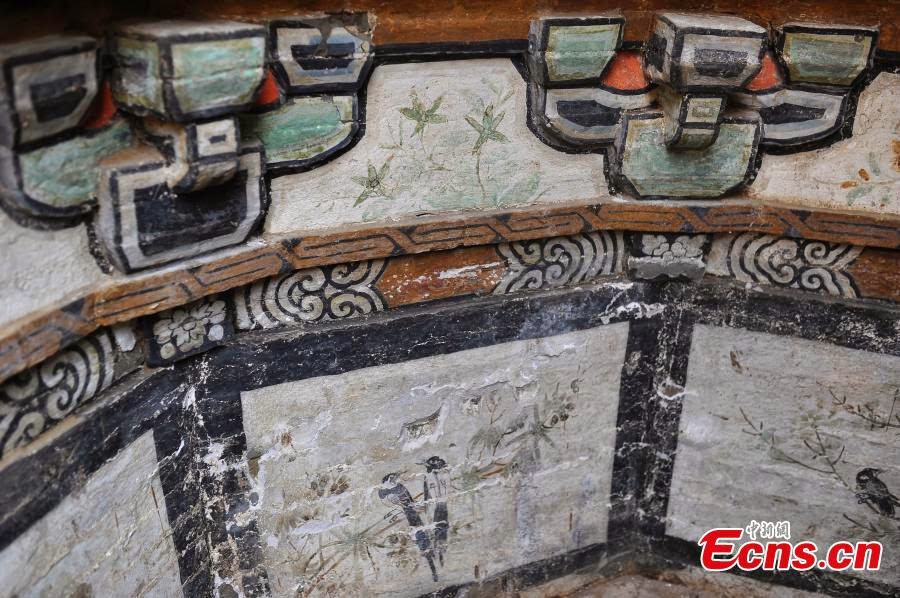 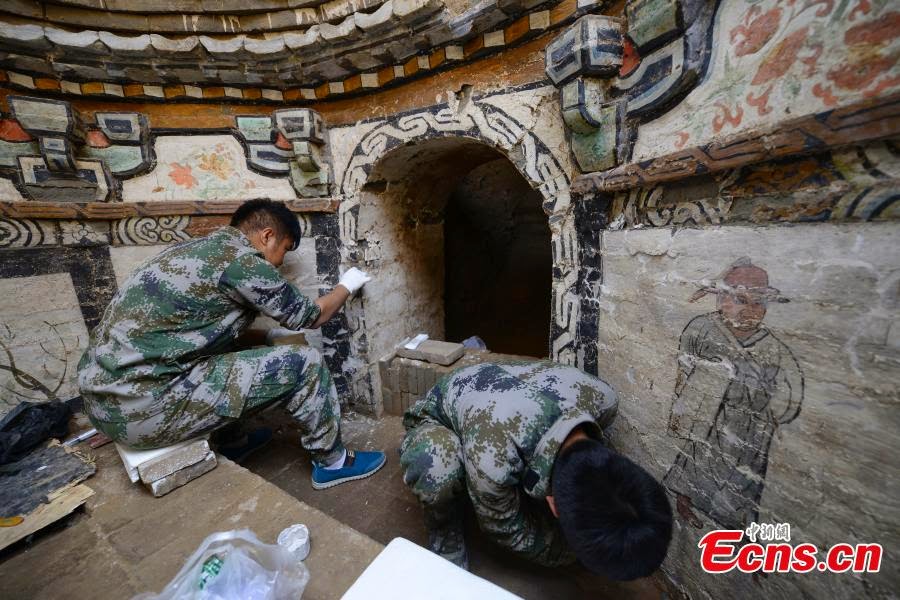 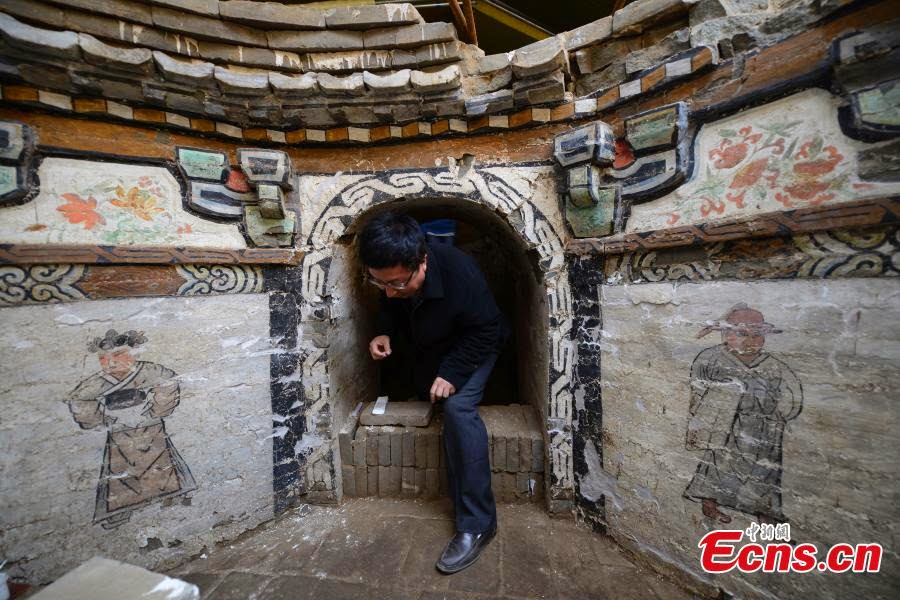 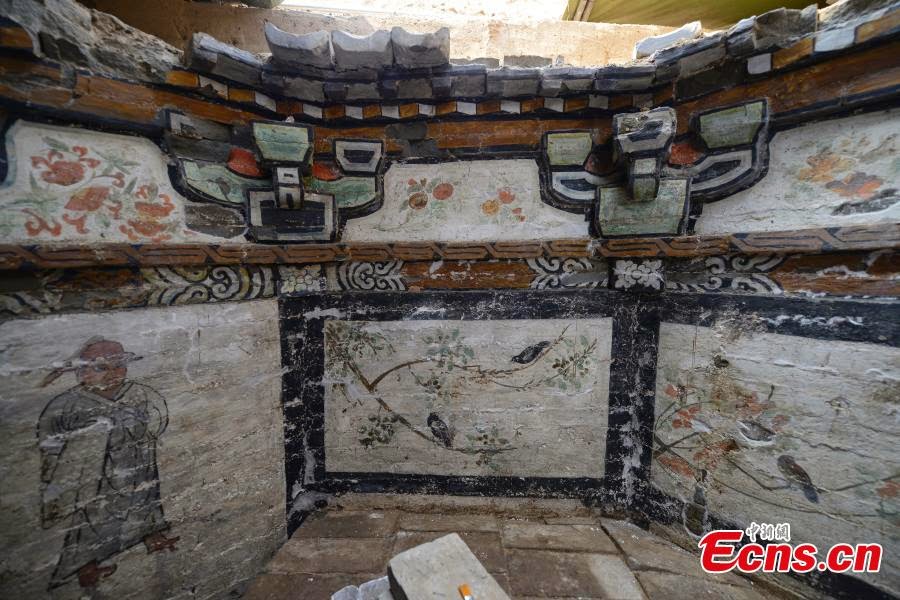 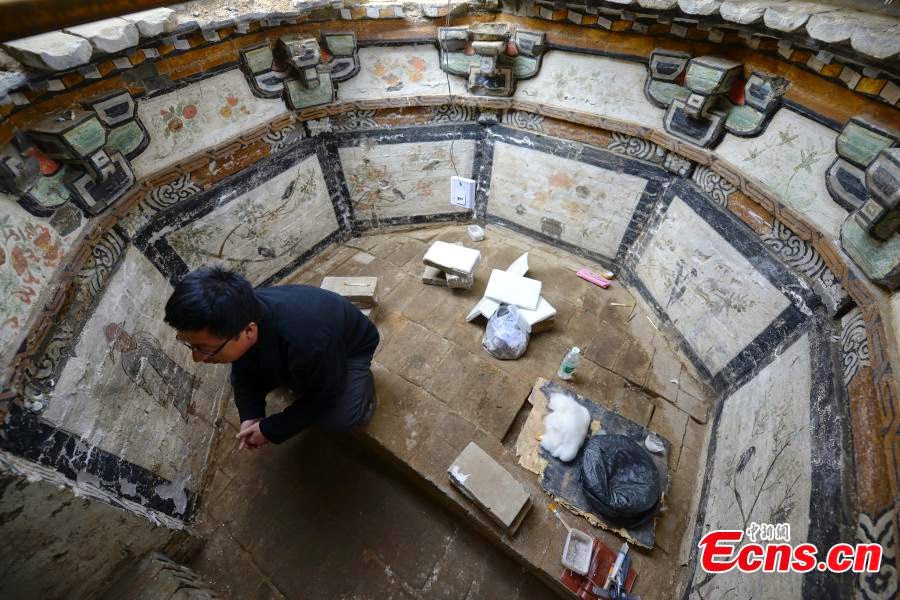