The Mongols in Iran 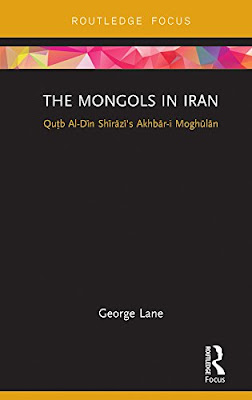 The polymath, Qutb al-Dīn Shīrāzī, operated at the heart of the Ilkhanate state (1258–1335) from its inception under Hulegu. He worked alongside the scientist and political adviser, Nasir al-Dīn Ṭūsī, who had the ear of the Ilkhans and all their chief ministers.
The Mongols in Iran provides an annotated, paraphrased translation of a thirteenth-century historical chronicle penned, though not necessarily authored, by Quṭb al-Dīn Shīrāzī. This chronicle, a patchwork of anecdotes, detailed accounts, diary entries and observations, comprises the notes and drafts of a larger, unknown, and probably lost historical work. It is specific, factual, and devoid of the rhetorical hyperbole and verbal arabesques so beloved of other writers of the period. It outlines the early years of the Chinggisid empire, recounts the rule of Hulegu Khan and his son Abaqa, and finally, details the travails and ultimate demise and death of Abaqa’s brother and would be successor, Ahmad Tegudar. Shirazi paints the Mongol khans in a positive light and opens his chronicle with a portrait of Chinggis Khan in almost hallowed terms.
Throwing new light on well-known personalities and events from the early Ilkhanate, this book will appeal to anyone studying the Mongol Empire, Medieaval History, and Persian Literature.
Posted by Hans van Roon at 22:51 1 comment:

In the Wake of the Mongols 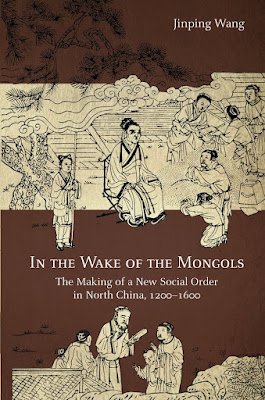 In the Wake of the Mongols:

The Mongol conquest of north China between 1211 and 1234 inflicted terrible wartime destruction, wiping out more than one-third of the population and dismantling the existing social order. In the Wake of the Mongols recounts the riveting story of how northern Chinese men and women adapted to these trying circumstances and interacted with their alien Mongol conquerors to create a drastically new social order. To construct this story, the book uses a previously unknown source of inscriptions recorded on stone tablets. Jinping Wang explores a north China where Mongol patrons, Daoist priests, Buddhist monks, and sometimes single women-rather than Confucian gentry-exercised power and shaped events, a portrait that upends the conventional view of imperial Chinese society. Setting the stage by portraying the late Jin and closing by tracing the Mongol period's legacy during the Ming dynasty, she delineates the changing social dynamics over four centuries in the northern province of Shanxi, still a poorly understood region.
Posted by Hans van Roon at 22:30 1 comment: