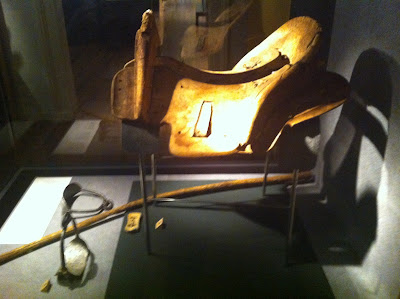 I visited this saturday this exhibition in Amsterdam.

Recent finds in Mongolia show a small part of their actual daily belongings and are quite rare.

These new finds are on show at this exhibition in the Allard Pierson Museum in Amsterdam which exhibition has been extended till the 4th of November 2012.
!

For more details, go to:

The combined exhibition Horse & Rider - From Homer to Genghis Khan is presented in the Allard Pierson Museum from 16 May to 16 September 2012. The impact of horse and rider on the world of the Greeks and on Central Asia lies at the focus, with two different cultures coming under the microscope: a nomadic and once feared nation from the Asian steppe and a city-based and influential society centred on the Mediterranean that we know as the cradle of our current Western civilisation. These are two highly evocative cultures, with Homer and the Mongol Empire of Genghis Khan as iconic opening and closing points. By means of this combined exhibition the Allard Pierson Museum for the first time confronts and combines its own classical collection with finds from a period and region that are not normally covered.
The Greek part of the exhibition shows the rise and use of the horse as mount and status symbol roughly from the Troy described by Homer right up to Alexander the Great, between 1300 and 300 BC. The Mongolian part shows archaeological finds recently excavated from rock graves in Mongolia. These finds from the 7th to 14th centuries AD have been exceptionally well preserved. They include musical instruments, items of clothing, weapons and of course saddles and harnesses. During this period, owing to the introduction of the stirrup, the rise of the steppe peoples reached its apogee in 1206 with the founding of the Mongol Empire by Genghis Khan - one of the largest empires in world history. The exhibition depicts a society in which man and horse work together as a single unit. The exhibition Horse & Rider transports the viewer to two different worlds in which man and horse are inextricably bound up with each other.
To mark the exhibition, a catalogue of the Mongolian part is being published (17.95 euros) along with a special from AP Notifications by the Association of the Friends of the Allard Pierson Museum (6.50 euros). In addition, there is a wide range of associated events, including lectures, guided tours, study days and workshops. Visitors - young and old - will be able to imagine themselves as true inhabitants of the Mongolian steppe in a fully equipped yurt, or traditional nomad tent, complete with appropriate clothing. The Mongolia of today as source of inspiration can be seen in Blue Sky, a selection of photographs and artwork by Matthea van Staden and Jeroen Toirkens.
More than 200 museum artefacts will be presented against a backdrop of life-size antique mosaics and Mongolian steppe landscapes, with 100 of them on loan from the Academy of Sciences of Mongolia. The arresting exhibition design , rich in texture and tangibility , is by Theo Braams. The exhibition has been made possible with the assistance of the LVR LandesMuseum in Bonn, the Bundesministerium für Bildung und Forschung (German Ministry for Education and Research) and the Gerda Henkel Foundation.
There is an additional charge of € 3 throughout the Horse & Rider exhibition, period (16 May to 16 September 2012).